Manchester-born Kieran declared for Ireland last year and travelled with the squad to Serbia before featuring in the training camp in La Manga in November.

Has had loan spells at Telford and Morecombe. His grandparents were from Galway and the talented goalkeeper featured in a Europa League squad for the Red Devils.

For the 2019/20 season, Kieran joined Burton Albion on loan. He made his senior Ireland debut against Bulgaria as a substitute and then started the friendly international against New Zealand. 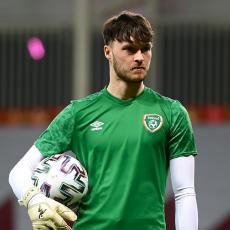