This dependable defender from Blessington, Co Wicklow, joined Peamount United in 2004 and made her way through the ranks to eventually help them qualify for the last 32 of the UEFA Women’s Champions League in 2011.

She captained the side to the inaugural Women's National League Championship in 2012, Moved to Swedish club Eskilstuna United in 2013 and helped them win promotion and league title in her first season.

In 2015 she helped Eskilstuna finish runners-up in the Swedish top division and qualify for the Champions League. She was Ireland’s Player of the Year in 2013 and was the first player in Group 1 to score against Germany in the 2015 World Cup qualifying campaign.

Louise played in England with Arsenal before joining Fiorentina in Italy in 2020. 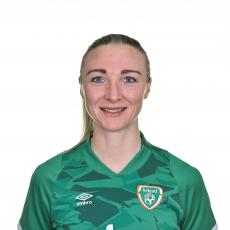