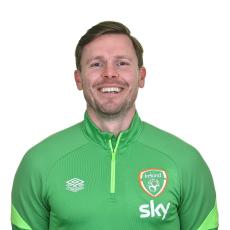 Tom joined the backroom staff in time for those the 2023 FIFA Women's World Cup qualifiers against Slovakia and Georgia in November 2021, as he combines his role as Ireland Women's Under-16 Head Coach.

Part of the current UEFA Pro Licence group, Elmes previously guided Wexford Youths to success in the Women's National League, FAI Women's Cup and WNL Shield before taking over with the Ireland WU16s.