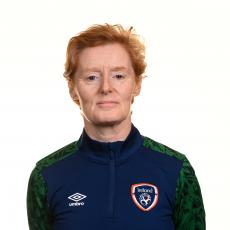 A hugely experienced coach, Eileen was one of the first women to earn the UEFA Pro Licence through the Football Association of Ireland.

She led Peamount United to the inaugural Women's National League title in 2012, while also advancing in the UEFA Women's Champions League.

Eileen also coached UCD Waves - who finished as League runners-up in 2015 - and was appointed as assistant manager to Vera Pauw in 2019.