Shane Long comes from Gortnahoe, Co. Tipperary, and, predictably, he was a richly talented hurler at underage level. He played for Tipperary in a semi-final of the All Ireland Minor Championship before opting for football.

He signed for Cork City after playing his under-age football with St. Kevin's and made an occasional first team appearance while playing for Cork's U21 team. He was transferred together with Kevin Doyle to Reading in the summer of 2005 and he had a meteoric rise to the top at the Madejski Stadium. He made his debut for Ireland's seniors in the European Championship tie away to San Marino in February, 2007.

He created history when introduced as substitute in the European Championship tie against Slovakia on March 28, 2007, at Croke Park - the first to have played hurling and International football at the venue. Shane played against Ecuador and Bolivia in the USA in May, 2007 and scored his first goal for Ireland against Bolivia in a 1-1 draw. He also scored a marvellous two goals against Denmark after coming in as a substitute during the friendly match in Aarhus on 22/08/07.

He scored again when introduced as substitute as Ireland were defeated by Russia at the Aviva Stadium in the UEFA 2012 preliminaries. He scored another  international goal when he converted a penalty in the friendly defeat to Norway in November, 2010. He came in as sub for the injured Kevin Doyle after just 20 minutes of the EURO 2012 qualifying game against Macedonia on March 26, 2011.

Shane struck a new level of performance when he excelled in the loss to Uruguay on March 29, 2011. He crowned his outstanding performance with a glorious headed goal. Once again he scored a great goal when introduced as sub for the friendly against Bosnia H'govina on the eve of Ireland's departure to the finals of EURO 2012.

Shane's club career moved to another level in the Summer of 2011 when, after a great season in the Championship with Reading he was signed by Premier Division club, West Bromwich Albion, on a five year contract. He had scored 21 goals in 51 games for Reading in the 2010/'11 season as they just failed to win promotion to the Premier Division.

Scored a famous goal against England in a friendly in May 2013 then captained his country against Georgia a few days later. Long also scored in the first game of the Martin O'Neill era against Latvia in November 2013.

Joined Hull City in January 2014 and signed for Southampton in August 2014. He has been a key asset for the Saints in the Premier League.

Took his Ireland goals tally to 16 with a neat finish against the Netherlands in May 2016. Long started each game for Ireland at UEFA EURO 2016. 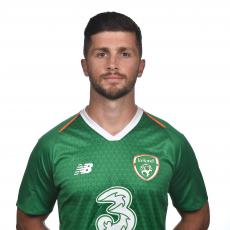