RICHARD KEOGH earned his promotion to the senior international squad after an impressive season with Derby County.

The defender has emerged as a good organiser who is prepared to compete and lead his team. He played for Ireland at U19 and U21 level.

The Harlow-born centre-back began his career at Stoke City and had a spell in Iceland with Vikingur before establishing himself at Bristol City.

He had loan spells at Huddersfield, Wycombe, Carlisle and Cheltenham before making a permanent move to Carlisle in 2008. His form at Brunton Park secured a move to Coventry City.

After two impressive seasons at Coventry he was snapped up by Derby and is now a key member of the Rams squad. He won his second cap against Georgia and scored the opening goal.

Martin O'Neill started the centre-back against Serbia in March 2014. Keogh captained Ireland for the first time against Oman in September 2014.

Unfortunate not to lead Derby County into the Premier League via the play-offs in both 2015 and 2016. He starred at UEFA Euro 2016 in a 1-0 win over Italy in Lille and against France in Lyon. 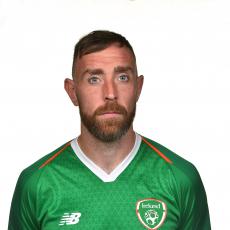