Diane plays her club football in Germany but has also enjoyed periods playing in the USA, Iceland, Norway and with Raheny United in Ireland.

From Balbriggan, she is an experienced player and a commanding presence in either midfield or defence.

She scored her first international goal against Northern Ireland at the 2013 Cyprus Cup. Her second goal came in the 1-0 EURO qualifying win over Greece in March 2020. 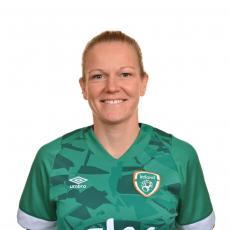