Daryl is a striker who made a name for himself with his hometown club, Waterford United, in the League of Ireland. Had a brief spell at English club Luton Town as a trainee in his teens but returned to Ireland in 2002 and signed for the Blues.

His power and pace while playing for Waterford and the Irish Under-21 team caught the attention of cross-channel clubs and Sunderland, then under the management of Mick McCarthy, beat off competition from Ipswich Town to land the big striker.

He brought his scoring tally into double-figures in Sunderland's Championship winning campaign of 2006/7 season and began the 2007/8 Premiership campaign as a first-choice striker for the Black Cats.

He was included in the Irish senior squad for the first time against Netherlands in August 2006 but had to wait until the US tour of the following year for his debut. That came against Ecuador and he collected a second cap when Ireland faced Bolivia in Boston.

He won his first competitive cap as a second-half substitute in the EURO 2008 qualifier away to Slovakia in September 2007. He was also used as sub by Giovanni Trapattoni in the Italian's first two matches.

Daryl signed for Celtic ahead of the 2010/11 campaign. He helped the Bhoys win the Scottish Cup that season but then went on-loan to Ipswich for two seasons before making it a permanent move in 2013.

Martin O'Neill gave the striker, who can also play on the left flank, an international recall against Serbia in March 2014.

Produced an excellent display against Italy at UEFA Euro 2016 in Lille and against France in Lyon. Murphy transferred to Newcastle United on August 31st and scored his first international goal in the crucial FIFA World Cup Qualifier away to Serbia five days later. 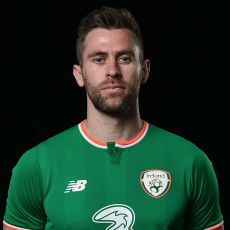