Kevin Doyle's powerful running and appetite for hard work ensured he was an indispensable member of Giovanni Trapattoni's squad. He is the ideal team player and a formidable opponent as he showed when helping Ireland draw with World Cup champions Italy to clinch a place in the play-offs for the finals in 2010 in South Africa.

Kevin was a stand-out performer in both legs of the play-off against France when his tireless running and skilful football contributed so much to Ireland's courageous attempt to make the finals in South Africa.

Wexford born, Kevin Doyle played schoolboy football for Wexford club Adamstown. With his direct style of play, the striker became an instant favourite with St. Patrick's Athletic at Richmond Park though he was soon off to Cork City. He scored six goals in eleven games for Ireland's U21 team while with Cork and was a member of the World Youth Championships squad. Kevin's regular goal-scoring exploits for Cork led to his transfer to Reading for the 2005/'06 season.

He won his first call up to the international side for the clash with Cyprus in October 2005. He helped Reading win the Championship and promotion to the Premiership in his first season and he was capped by Stephen Staunton against Sweden, Chile and Netherlands in 2006. He started as partner to Robbie Keane against Germany in Euro qualifier in September, 2006. Injury kept him out of the following matches against Cyprus and the Czech Republic but he returned with a bang to claim his first goal for Ireland in the 5-0 defeat of San Marino on November 15, 2006. Kevin has been an indispensable member of the Irish team in the EURO 2012 qualifying matches but was unlucky to pick up a serious knee injury against Macedonia on March 26, 2011.

He started against Slovakia at Croke Park on March 2007 and emphasised his potential by heading the only goal of the game in spectacular style. He scored another spectacular headed goal against Ecuador in New Jersey on 23/05/07 as Ireland drew 1-1 and struck further goals in the European Championship qualifier away to Slovakia on 08/09/07 and Wales on 17/11/'07. Was on the mark again with a beauty against Georgia in Ireland's opening World Cup qualifying tie on 06/09/'08. Kevin captained Ireland in the friendly against South Africa in September 2009 in the absence of regular captain Robbie Keane. He was transferred from Reading to Wolverhampton Wanderers in the Premier Division in the Summer of 2009 and his outstanding form in the 2009/10 season helped Wolves retain their position in the Premier Division.
Although he lost his place in the international squad after Wolves were subsequently relegated to League One, Doyle returned to the Irish set-up initially under Noel King and then under Martin O'Neill.

He spent the second half of the season on-loan at QPR, who he helped secure promotion to the Premier League via the play-offs. He joined Crystal Palace in a six-month loan deal in August 2014. 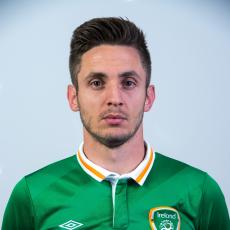