Joey has represented Ireland at all youth levels from Under 15 to Under 21, making his debut for the latter against Portugal in February 2005. He joined Bolton Wanderers as a trainee making his debut for them against Yeovil Town in the Carling Cup in September 2004. A loan spell with Sheffield Wednesday followed that before he returned to the Reebok stadium and he made his Premiership debut in the last game of the 2004/2005 season against Everton. In March 2006 he won his first full Irish cap against Sweden but a long term knee injury has hampered his progress.

Joey made a welcome return to International football after a four year absence in August 2012 when he came in as substitute against Serbia in a friendly in Belgrade and was subsequently capped against Oman. 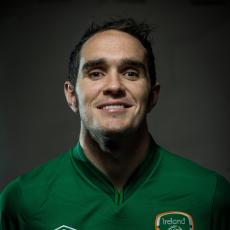