Born in Coventry, England, James qualifies for Ireland through his parents and first pulled on the green jersey at Under-19 level.

The former Aston Villa academy graduate starred for the Ireland Under-21s, scoring a hat-trick in 2011, as his club career started to take off.

He enjoyed productive spells with Shrewsbury Town and Swindon Town before moving to Hibernian in Scotland. In 2014, he rejoined Shrewsbury but then moved on to Crawley Town and then to Luton Town.

He helped Luton achieve promotion to the English Championship in 2019 and then earned a call-up to the Ireland senior squad under Mick McCarthy.

James made his Ireland senior debut against Bulgaria, where he also scored, in a friendly win in Aviva Stadium. 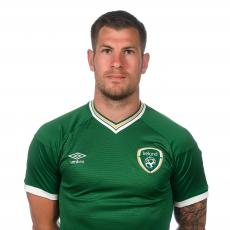