Hailing from Lucan, Co Dublin, Farrelly represented the Republic of Ireland at every underage level before making her senior debut in January 2019 against Belgium.

Able to play in defence or midfield, she broke through as Peamount United, where was she one of the stand-out players in the double-winning 2020 season.

In 2021, she joined Glasgow City having been previously studying for a BSc Sports Science & Health in DCU. 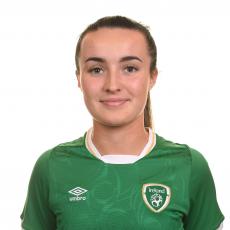