Gavin Bazunu came through the Shamrock Rovers Academy before moving to Manchester City.

Bazunu became a SSE Airtricity League sensation after he made his Rovers debut at the age of 16 and produced a number of stunning saves, both domestically and in European competition.

Bazunu moved to Manchester City in 2019 and was included in Stephen Kenny's first Under-21 squad.

After an impressive loan spell at Rochdale in the 2020-21 season in League One, Stephen Kenny selected Bazunu for his senior squad and he made his debut for Ireland in the 1-0 defeat to Luxembourg. He kept his spot in the starting XI for the matches against Qatar, Andorra and Hungary and has now established himself as the No.1 choice after his clean sheets against Serbia, Portugal and Luxembourg in 2021.

After an impressive 2021/22 season on loan at Portsmouth, Bazunu secured a move to Premier League side Southampton from Manchester City in a multi-million pound deal. 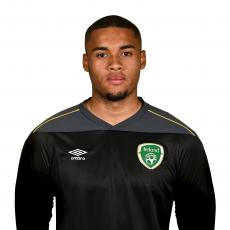