Aaron Connolly is a Galway native who emerged with Mervue United and has been a prolific scorer at underage level with Ireland.

He made his Ireland U17 debut a year early against Hungary in September 2015.

In his eight appearances for the U17s this season he scored six goals as Ireland qualified for the UEFA Finals in Croatia.

Aaron made his senior debut as a substitute away to Georgia in the EURO 2020 qualifiers before starting the next game against Switzerland. 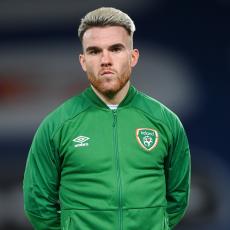