JAYSON is from Cappoquin in Co Waterford and played schoolboy football for Railway Athletic and Villa FC in the county.

An attacking midfielder with an eye for goal, he was the U19 captain for the 2017-18 campaign and has now progressed to the U-21 squad where he was made captain by manager Stephen Kenny.

Molumby followed Stephen Kenny up to the senior team squad and made his senior team debut against Finland in September 2020 at the Aviva Stadium. 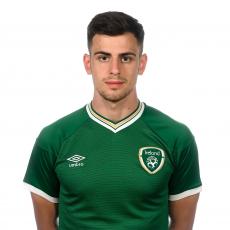