London-born Ronan has emerged as one of the most exciting players in the SSE Airtricity League in the past year and has been big asset for the Candystripes. He can play in midfield or across the front three and impressed at the La Manga training camp in November.

A native of St Johnston, Donegal, he played schoolboy football for Kildrum Tigers and Swilly Rovers before moving to Derry City where he progressed through the ranks to break into the first team.

He made his Ireland U21 debut against Kosovo in March 2017.

On 9 September 2018, Curtis was called up to the senior Republic of Ireland squad for the friendly match against Poland two days later, in which he was an unused substitute. He was again added to the Ireland squad on 14 October for a UEFA Nations League encounter against Wales. He made his full Ireland debut on 15 November 2018, coming on as a half-time substitute for Callum O'Dowda in a goalless friendly against Northern Ireland at the Aviva Stadium. 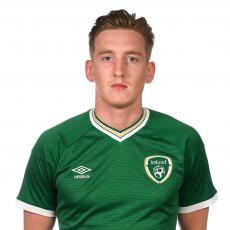