CAOIMHIN Kelleher is the brother of Ireland U19 defender Fiacre Kelleher and the Ringmahon Rangers goalkeeper has proven an excellent addition to the U17 squad.

After making his U17 debut against Malta in August 2014, he made his competitive debut in the UEFA U17 Championships against Scotland in September and kept a clean sheet.

Impressed in the UEFA U17 Championships in May 2015 with a clean sheet against the Netherlands.

Joined Liverpool in the summer of 2016 and has progressed well at Anfield.

Was a regular starter for Ireland U19s in the 2016-17 season and progressed into the Under-21 squad in 2019. Kelleher went on to win 10 caps for Stephen Kenny's U-21 side and the same manager progressed Kelleher to the senior squad who made his debut for the team in the 0-0 draw against Hungary in June 2021.

Kelleher has enjoyed a number of starts for the Republic of Ireland national team during the course of the 2021/22 season, including four successive matches in the UEFA Natioins League during June. 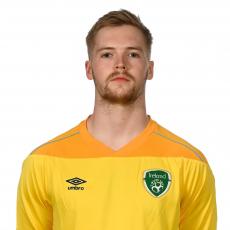