Dubliner Jeff emerged with St Kevin's Boys where he played alongside Robbie Brady and broke through at underage international level with his club-mate.

A talented midfielder, Jeff soon caught the attention of Derby County and made the move to Pride Park, where his progress was steady.

Hendrick played a central role in Ireland reaching the semi-finals of the UEFA U19 Championships under Paul Doolin in 2011.

Noel King called Jeff up to the U21s later that year and it was not long before Giovanni Trapattoni moved to bring the midfielder into the senior international set-up.

Jeff made his senior debut against Poland in February 2013 and he has developed into a key squad member under Martin O'Neill's guidance. His assists provided vital goals along the way to France.

Started the Euro 2016 opener against Sweden in Paris where he producing a storming display and made a big impression in the memorable victory over Italy in Lille.

Following his impressive displays at UEFA EURO 2016, Hendrick transferred to Premier League side Burnley for a club record fee of £10.5 million. Hendrick scored his first international goal away to Serbia in September 2016. 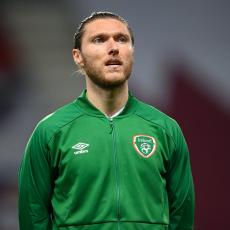