Wicklow native Darren has been one of the most highly rated goalkeepers in Ireland since first emerging at U15 level and he has represented Ireland at every level since.

He won his first senior call-up in March 2011 for a game against Macedonia but did not actually make his full international debut until a friendly game against Oman on 11 September 2012, coming on as a substitute in a 4–1 win.

Darren won his second Ireland cap against Spain in June 2013. His professional career began with Charlton Athletic. He had loan spells at Hereford, Accrington Stanley, Gillingham, Welling United and Bury before making a permanent switch to Mothwell in 2010. He stood out in the Scottish Premier League then moved to Birmingham City in 2013.

He played schoolboy football with Ardmore Rovers in Bray and also played for the Wicklow U16 GAA team. His father Ed Randolph was one of Ireland's top basketball stars after moving over from America in the 1980s.

Darren signed for West Ham United in June 2015. He helped Slavan Bilic's side reach the FA Cup semi-finals and also impressed in their fine run in the Premier League.

He was Ireland's starting goalkeeper at UEFA EURO 2016. Darren moved to Middlesbrough before returning to West Ham in 2020. 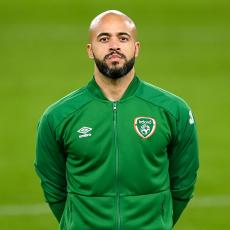