GALWAY native Ryan emerged as one of the most talented young players in the SSE Airtricity League as a striker but has evolved into a dynamic midfielder in time.

He first broke through as a 17-year-old with Mervue United then moved on the Galway FC and helped first time to promotion via the play-offs in 2014. He then joined Queens Park Rangers

Ryan was also a stand-out player at Schools International level in 2014 and his younger brother Ronan was also capped at U17 level this year.

Manning made a big impression at the UEFA U19 Championships qualifying tournament and appeared in all three games against Malta, Gibraltar and Switzerland.

He made his Ireland U21 debut against Kosovo in March 2017 after an impressive breakthrough at QPR. Manning made his senior team debut in the 0-0 draw against Bulgaria in November 2020. 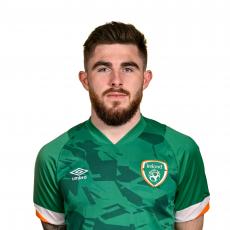