Anthony Stokes always looked exceptional as he advanced through the FAI under-age structure. His ability to score at all levels on his way to senior status reflected keen instinct and excellent technique.

Arsenal at one point appeared to be grooming him for a position but when he went to Falkirk on loan at the start of the 2006/'07 season he spectacularly illustrated his goal-scoring ability by scoring 16 goals in 18 matches in all competitions.

He became the first player in the Scottish Premier League to score consecutive hat-tricks in October 2006. He was signed by Sunderland mid-way through the 2006/07 season and was transferred on loan to Crystal Palace during the 2008/09 season. He played as substitute in "B" international against Scotland at Dalymount Park in November 2006 and was transferred to Sunderland in January 2007. He made his senior debut for Ireland as substitute against San Marino in February 2007.

He played in both matches, against Ecuador and Bolivia, in Ireland's brief visit to America in May, 2007.

Anthony returned to the Scottish Premier League when he signed for Hibernian in August 2009. He joined Celtic in August 2010 and has scored more than 50 goals in all competitions for the Bhoys and has played for the Scottish club in the UEFA Champions League. 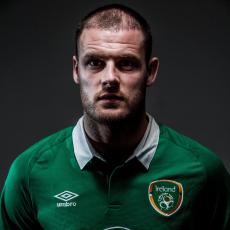