Darron is a strong, forceful player who dominates the area in front of the centre-backs and is possessed of the ability to score spectacular goals. The Derry-born youngster won the prestigious 'Jimmy Murphy Award' in May 2006 as United's Academy player of the year and featured throughout the Red Devils first-team pre-season games in the summer of 2006.

Went to Royal Antwerp on loan for 2006/07 season and represented Ireland B team against Scotland in November 2006. Graduated to the senior set-up for the away qualifier in San Marino during February 2007 where he impressed then manager Stephen Staunton enough to win a place on the substitutes' bench. He won his first senior cap as a substitute in the 4-0 defeat of Denmark in Aarhus on 22/08/07. He came in as substitute in the European Championship qualifying tie against Slovakia on 08/09/07. Joined Wolves on loan during 2007/'08. Became a regular with Ireland's senior squad under Giovanni Trapattoni in midfield in partnership with Glenn Whelan or Keith Andrews. Replaced the injured Whelan in the second leg of the World Cup play-off in Paris on 18/11/'09. He is known for his powerful shooting and he produced a memorable strike to open his international account when Ireland beat Wales 3-0 in the inaugural tie of the Carling Nations' Cup on 08/02/'11. Gibson transferred to Everton for the 2011/'12 season and he showed the benefits of regular first team football with his club when he excelled in the friendly against Bosnia on the eve of Ireland's departure to the finals of EURO 2012.

Gibson suffered an unfortunate injury in a World Cup qualifier against Kazahkstan in October 2013 and marked his return to the international scene against Oman in September 2014.

He was named in the preliminary squad for Euro 2016 but was ultimately not selected for the final 23-man squad that travelled to France. 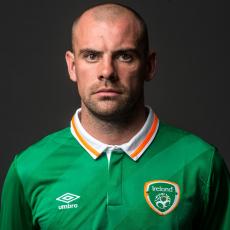