Darren Randolph made his Ireland debut as a substitute against Oman at Craven Cottage in September 2012.

He started his career with Charlton Athletic in the summer of 2003. He spent several seasons on loan to a variety of clubs before signing for Motherwell in July 2010 on a free transfer. He has cemented himself as a first choice goalkeeper and last year broke the club's record of 15 cleansheets. He agreed a move to Birmingham City in the summer of 2013.

He was called up to Giovanni Trapattoni's squad for the first time on 14 March 2011 for the Euro 2012 qualifier against Macedonia. In May 2011 he was once again called into to the Republic of Ireland squad for the games against Northern Ireland and Scotland in the Carling Nations Cup.

He won his second cap against Spain in New York. His father Ed was a former US basketball pro who was a biggest star on the Irish scene in the 1980s and 1990s. 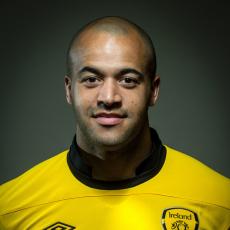