The 25–year-old was voted Player of the Year in the Bus Eireann National Women's League in 2012 and 2013 and finished last season as top scorer with 28 goals. A Maynooth University student she helped Peamount to the League and Cup double in 2012 and the League Cup in 2013. Also made the Ireland squad for the 2013 World University Games. Currently out with a long-term knee injury. 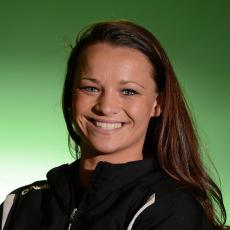