Andy started his career with St Joseph's Boys in Dublin before moving to Leeds Utd. While there he had loan spells with Scunthorpe Utd and Bury. In February 2005 he signed for Scunthorpe Utd and his form saw Mick McCarthy step in and take him to Wolves in January 2007.

A regular for Ireland's Under 21 side, Andy played for the 'B' Team in November 2006 and won his first senior cap against Equador in 2007.

Strongly built, with a proven eye for a goal, Andy's goal against Serbia was voted Goal of the Year in the FAI Awards.

After enjoying a successful loan spell with Leeds Utd from Wolves, Andy was snapped up by Millwall FC in the January transfer window in 2013.

He opted to sign for Australian side Perth Glory in the summer of 2014. 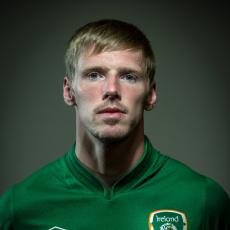