Aiden, who was born in Glasgow and qualified for Ireland through his grandparents, first played at international level at Under-16 grade. Since then he has gone though all the levels up to the Under-21s and senior. His form for Celtic in season 2003/'04 saw him included in the Ireland Senior squad for the first time for the summer internationals. He came in as sub against Chile at Lansdowne on 24th May, 2006 and was outstanding when he started against Netherlands at Lansdowne on August 16, 2006.

Came in as sub in the European Championship tie against Germany and made his first competitive start in the UEFA Championship game against Cyprus in Nicosia on October 7, 2006. He showed great form when he started against Slovakia and was excellent against Wales in Cardiff in November, 2007. McGeady missed Giovanni Trapattoni's first match as manager against Serbia because of club commitments but he was a regular in the subsequent matches in the 2010 WC qualifying tournament.

He was in sparkling form when Ireland drew 2-2 with World Cup holders Italy to clinch a place in the play-offs for the finals in South Africa. He was introduced as substitute for Liam Lawrence in both legs of the World Cup play-off against France.

Aiden scored a very welcome first goal at senior level for Ireland with a sensational early strike against Macedonia in the EURO 2012 qualifier on March 26, 2011 in his 37th appearance.

Aiden was transferred to Spartak Moscow in August 2010 after spending ten years at Celtic. Featured in the Euro 2012 squad. He worked with new Ireland boss Martin O'Neill at Celtic and scored in O'Neill's first Ireland game against Latvia in November 2013.

Joined Everton in January 2014. He had a loan spell at Sheffield Wednesday in January 2016 before joining Preston North End on a loan deal for the 2016/17 season. McGeady signed a permanent deal with Sunderland in the summer of 2017. 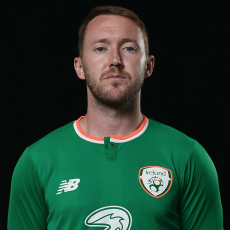