Paul is originally from Kilpedder in County Wicklow and played his schoolboy football with Greystones and Newtown. He signed for Manchester United in July 2002 but found his opportunities of breaking into the first team limited. Impressive loan spells at Walsall during the 2004/5 season and Brighton and Hove Albion in 2005/6 season meant there was no shortage of clubs willing to sign him when he expressed his desire to leave Old Trafford in August 2006.

Paul joined Championship team West Bromwich Albion where he held down a regular first-team slot and earned a call-up to Ireland's senior squad. McShane represented Ireland at all levels from U15 upwards.  He was promoted to the senior squad by manager Stephen Staunton for the double EURO 2008 qualifying fixture against Cyprus and the Czech Republic in October 2006.

He made his full debut against the Czech Republic and impressed sufficiently to earn a man-of-the-match accolade.  He partnered Richard Dunne at centre-back in the friendly against Colombia under manager Giovanni Trapattoni and has featured regularly at right-back since. Sunderland allowed him to move to Hull City on loan for the 2008/'09 season and recalled him in January 2009. He was signed by Hull at the start of the 2009/2010 season.
Came in as substitute for the injured John O'Shea in the World Cup play-off second leg in Paris on 18/11/'09.

The friendly win by two goals over Italy in Liege in June 2011 was a proud day for Paul who was charged with captaincy of the team by Trapattoni. The manager showed the trust he has in this very committed defender by taking him as a back-up player to the finals of Euro 2012.

McShane has since moved on to Reading and was named as stand-by player for Euro 2016. 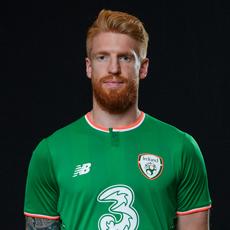