Wes is yet another product of the great Belvedere FC academy. He left them to move down the road, as it were, to Shelbourne, where he enjoyed great success and proved a big hit with the fans. From Shelbourne he moved to Livingston in Scotland before joining Blackpool. His move to Blackpool gave him a higher profile and he was playmaker on the team that won promotion to the Championship last season. His form also earned him an Irish call up from Giovanni Trapattoni and an international cap against Colombia in May 2008.

Now a prominent player with Norwich City he has won much praise for his contribution at Carrow Road which was recognised by the Irish management when he featured against Greece in November 2012.

Hoolahan picked up his first international goal against Poland in February 2013. He made his first start for his country against Georgia.

Wes played his first 90 minutes for Ireland in his first competitive start against the Faroe Islands in June 2013. He started Martin O'Neill's first Ireland game against Latvia in November 2013.

Hoolahan scored Ireland's opening goal at UEFA EURO 2016 against Sweden in Paris. He also set up the winner for Robbie Brady against Italy in Lille. 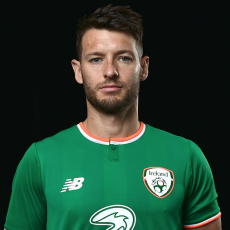