David has enjoyed a stellar career in the Airtricity League with Derry City, culminating in an FAI Cup triumph in 2006. This earned him a move to Cardiff City, marking a return to Wales, as he had previously been on the books of Barry Town, who transferred him to West Ham Utd.

He failed to make the breakthrough at West Ham and Cardiff, so it was third time lucky when he signed for Millwall in 2008. He has been ever present in the Millwall squad since, and helped them win promotion to the Championship from League One.

David made his debut for Ireland as a substitute for Shay Given against Northern Ireland in the Carling Nations Cup last year. He then started as goal keeper for Ireland's memorable 2-0 win over Italy in Liege and was first choice against Poland in February 2013.

Became Ireland's oldest competitive debutant in the 0-0 draw with Sweden in March 2013. He then produced a sterling display in the friendly against England at Wembley in May. He had helped Millwall to the FA Cup semi-finals so played in the famous London venue twice in a matter of weeks.

Was unfortunate to miss out on selection for Euro 2016 after winning his 24th cap against Belarus on May 31 2016. 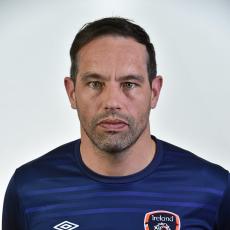