Glenn scored a breath-taking goal within eight minutes of the start of Ireland's World Cup qualifying tie against Italy in October 2009. He was forced off with injury before the end but not before he had contributed hugely to Ireland's exciting performance as they clinched a place in the play-offs for the 2010 WC finals.

Glenn was signed by Manchester City from Maryland Boys of Dublin and figured several times with the first team squad. He established himself as a top-class professional when he moved to Sheffield Wednesday after a loan period with Bury and his consistent form made him a transfer target for Stoke City. He won many caps for Ireland's Under-age teams and captained those teams as well.

When Giovanni Trapattoni was appointed manager of Ireland he called Whelan into his first squad and he played 90 minutes in Trapattoni's first two games against Serbia and Colombia in May 2008. He was in central midfield and scored a critical goal against Georgia in Ireland's opening match in the 2010 World Cup in September '08.

He was a regular starter under Martin O'Neill's stewardship of the Irish team until he was given a farewell game in 2018. However, the return of Mick McCarthy as manager saw Glenn return to the squad. 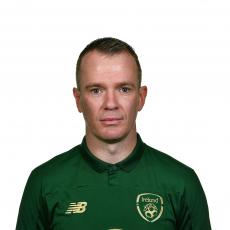