Dublin-born Stephen moved swiftly through the ranks at his first professional club, Tottenham Hotspur, on foot of his move from Dublin nursery Belvedere.

Following the departure from White Hart Lane of fellow Irishman Stephen Carr, Kelly pushed for the right-back slot and was granted his first-team debut in 2003, proving to be a dependable defender.

After three years with the Londoners, Kelly opted to join Championship club Birmingham City and led the Blues to promotion in his first season. He was the only Birmingham player to play every minute of their 2007/8 Premier League campaign.

Kelly spent a spell on loan at Stoke City during the 2008/9 season and departed Birmingham for Fulham on a permanent transfer at the end of the season, citing European football with the Cottagers as a key influence in his decision.

Stephen first came to the fore at International level as an Under-17 international and played at every underage level thereafter, including at the Under-20 FIFA World Cup of 2003.

His full debut arrived in May 2006 against Chile and he has operated in both full-back positions and at centre-back during his senior international career. He was honoured with the captaincy of the team for the friendly against Uruguay on March 29, 2011 when he won his 21st cap.

He impressed at centre-back in the absence of Richard Dunne in the Carling Nations Cup ties against Northern Ireland and Scotland in May 2011. And he was a capable deputy for the injured John O'Shea when Ireland drew with Russia in Moscow in the EURO 2012 qualifying match in September 2011.

Kelly started the second game of the Martin O'Neill era against Poland in November 2013. 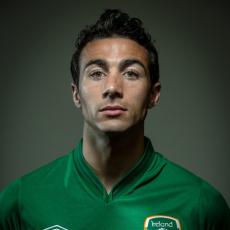