John signed professional terms with Manchester United in August 1998 and he made his debut for them just over a year later, away to Aston Villa in a Worthington Cup defeat. After spending two seasons in the Reserves, he joined Second Division Bournemouth on loan in January 2000. John returned to Old Trafford in March 2000 before another loan spell during the 2000/'01 season to Royal Antwerp and since his return he has been a regular in the United side.

John won his first cap against Croatia in August 2001 and scored his first international goal against Australia in August 2003. He held down the central midfield position in the critical World Cup qualifier against Switzerland in October, 2005, and his versatility makes him an invaluable member of the Ireland and Manchester United squads. He was impressive at centre-back against Wales in UEFA Championship in November, 2007 and under Ireland current manager, Giovanni Trapattoni, he has played at centre-back, full-back and in midfield as the occasion demanded.

John brought his distinguished career at Manchester United to a close when he transferred to Sunderland in the Summer of 2011.
He captained Ireland when they played Serbia in August 2012 as Ireland began the build-up to the World Cup 2014 qualifying tournament. He worked with current Ireland boss Martin O'Neill at Sunderland. 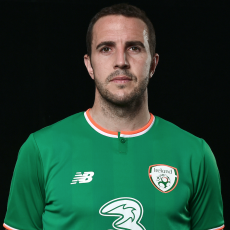