Keane has had a chequered career at club level and one of his most fruitful spells was when he was transferred on loan from Tottenham Hotspur, to Celtic in January 2010 until the end of the 2009/'10 season.

Keane was a Celtic fan from boyhood and the fact that he was not an automatic first choice for 'Spurs in the 2009/'10 season gave him the opportunity to fulfil a boyhood dream. His arrival in Glasgow was greeted with enthusiasm by Celtic fans.

Robbie Keane's all-action style for Ireland has complemented the astute leadership of manager Giovanni Trapattoni. Keane has grown into an influential captain as he showed with a typically unselfish performance as Ireland drew 2-2 with World champions Italy to clinch a place in the play-offs for the 2010 finals in South Africa.

He led by example when Ireland were unlucky to lose the play-off with France and scored a marvellous goal as Ireland played sparkling football in the second leg in Paris.

Robbie started his career with Crumlin United and played for Wolves, Coventry City, Inter Milan and Leeds United before joining Tottenham Hotspur. In 1998 he helped the Ireland Under-18s to success in the European Championships and the following year he played for the Irish Youths in the World Cup in Nigeria. He won his first Senior cap against the Czech Republic in Olomouc in March '98 and played outstanding football in the World Cup finals of 2002 in South Koreaq/Japan. He is the most prolific goal scorer in Ireland's history.

He was appointed captain by Stephen Staunton when he took over as manager in January 2006. Celebrated a great day on November 15, 2006 when he scored his first hat-trick for Ireland in the final international at the old Lansdowne Road Stadium against San Marino.

Giovanni Trapattoni confirmed Keane's position as captain of Ireland when he took over as manager. Keane's goal-scoring exploits continued apace and, added to his unbounded enthusiasm, he proved an influential captain on the march to Poland and the EURO finals of 2012. He transferred to Liverpool in the summer of 2008 and returned to 'Spurs six months later, in January 2009.

He moved on transfer to the Major League Soccer body in America when he signed for Los Angeles Galaxy in the Summer of 2011. His substitute appearance against Georgia in 2013 equalled Ireland's record caps total which he shared with Shay Given.

Robbie marked establishing himself as Ireland's most capped player with a hat-trick against the Faroe Islands on June 6, 2013. He scored the first goal of the Martin O'Neill era as Ireland boss against Latvia in November 2013.

Keane made his final appearance for IReland in the '3' International Friendly against Oman on 31 August 2016, scoring Ireland's second goal in a 4-0 win. Robbie Keane finished his international career with a record 146 appearances and 68 goals. 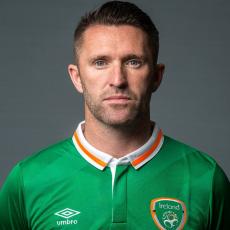