Richard Dunne's enduring excellence is one of the principal reasons why Ireland can match the best of international teams. His performance in the scoreless game against Russia in Moscow in the UEFA Championship of 2012 qualifying match was so good it was beyond description. He showed his value again when he returned after a one-match ban and scored Ireland's second goal in their 2-1 win over Armenia to clinch a play-off place.

He has been so consistently brilliant for Ireland that his excellence is almost taken for grant.

He played a major role in the qualifying tournament for the 2010 World Cup and his magnificent defensive work was one of the principal reasons Ireland faced into the play-offs with confidence. He maintained his high standards in both legs of the play-off with France as Ireland failed at the last hurdle.

Richard from Tallaght, Dublin, was transferred from Home Farm to Everton and joined Manchester City in October 2000. Was signed by manager Martin O'Neill for Aston Villa at the start of the 2009/'10 season.

The year 1998 was a particularly memorable one for him as he won his first B cap against Northern Ireland at Tolka Park in February. That summer he helped the Ireland Under-18s to success in the European Championships and that November he made his Ireland Under-21 debut against Yugoslavia in Snederevo.

By that stage he had been included in Senior squads and he won his first full cap against Greece in April 2000. Richard has won 72 caps.

He was made captain of Manchester City in season 2005/'06 and was regularly voted 'Player of the Season' in Manchester. He is a pillar of Ireland's defence and is valued for his leadership qualities as well as his ability to produce a goal when it is most needed.

A case in point was the critical goal he headed into Bulgaria's net in the World Cup qualifying game in Sofia on June 6th, 2009 - a goal that helped Ireland take a precious point from a difficult tie.

Dunne ended his nine year spell at Eastlands when he signed for Aston Villa in September 2009.
A nightmare season saw him fail to make a club appearance in 2012-13 but he made his first appearance in 12 months in the friendly international against Georgia in June 2013. 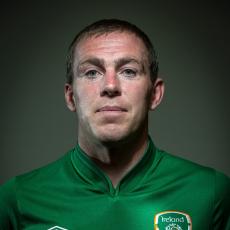