Sean is from Castlecomer, Kilkenny, and played with Deen Celtic for many years before signing for Evergreen FC.

The talented striker was capped at Schools international level then progressed to the Ireland U19 side.

He moved from Evergreen to Waterford United and made rapid progress in the SSE Airtricity League. He was a student at IT Carlow before he moved to West Ham United in 2013.

The striker had a loan spell with Sligo Rovers and another with Accrington Stanley before joining Dundalk in July 2015.

Sean made his Ireland U21 debut against Andorra in March 2015 and scored his first goal at this level against England C in June 2015.

His first appearance for the senior team came against Moldova in 2017. He scored his first senior goal in the friendly win over New Zealand in 2019. 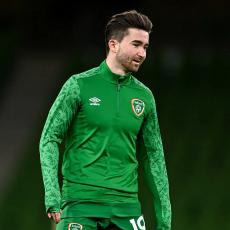