Keeva played in both games in the Carrickfergus Cup and was then named in the squad for the UEFA Championships qualifiers in Kazan in August 2013. Previously with WFTA. She was also in last year's squad at this age-group.

She won her first Under-17 cap against Denmark in 2012. Scored her first U-17 international goal against Bosnia & Herzegovina.

Keeva was part of the WU19 squad who reached the semi-finals of the 2014 UEFA European Championships, where she scored against England in the group stages.

Now playing in Scotland with Celtic, Keeva earned her first senior cap in the 3-2 win over Ukraine in Tallaght Stadium. 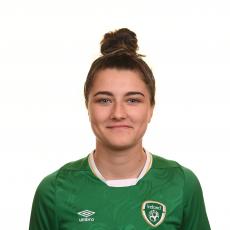