CAMEROON-born Noe captained the U17s in their UEFA Championships qualifying round matches in October then promptly stepped up to help the U19 side take the same step in their qualifying campaign.

Noe emerged with Mayo side Castlebar Celtic and was linked with many clubs before opting to join Fulham in January 2013. He joined Birmingham City in 2015.

His brother Thierry was capped by Ireland at U15 level in 2014. 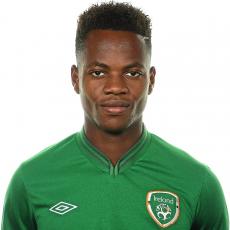