GRAHAM moved from Belvedere FC to Aston Villa as a teenager. Has has played for Ireland since U17 level and won his first U21 cap against Portugal in March 2013.

Burke won his first senior cap away to France in Paris before making his home debut and scoring five days later against USA.

His fine form with Shamrock Rovers in the SSE Airtricity League saw Burke transfer to Championship side Preston North End in June 2018. 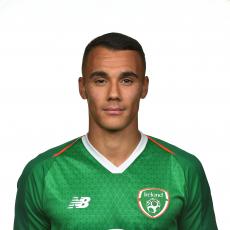