Simon Cox made his debut in the finals of the EURO 2012 tournament when introduced as substitute in the second half of Ireland's opening match against Croatia in Poznan as Ireland sought in vain to come-back from a 1-3 deficit. Manager Giovanni Trapattoni showed his confidence in the hard-working striker when he selected him to start in Ireland's second game against Spain.

Simon began his professional career at Reading before moving to Swindon Town. Simon qualfies for Ireland through his grandmother who hails from Galway. He scored on his debut against Northern Ireland and managed another another goal in the 2-0 victory over Italy in Liege.

He made an instant impact on the team, often featuring in Trapattoni's starting XI and offered a very credible alternative to Ireland's other strikers. He also clocked up an impressive 10 caps in the latter half of 2011 and scored a third goal for Ireland as a second half substitute in the friendly against the Czech Republic on  29/02/'12.

Simon was comfortable at international level from day one and his reliability to produce a committed and hard-working performance ensured he made the 23-man squad for the finals of the EURO 2012 Championship in Poland/Ukraine.

Cox scored his fourth international goal in a friendly against Georgia in June 2013. He was recalled by Martin O'Neill and came on as substitute against Italy at Craven Cottage in May 2014. 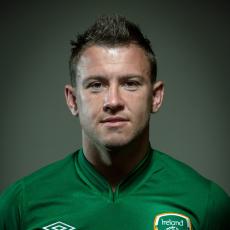