Horgan was capped at under-18 schools level for the Republic of Ireland at the beginning of 2010, scoring in a 3–1 victory over Australia in January, and later appearing in the Centenary Shield in March.

In October 2010, Horgan made his debut for the Republic of Ireland at under-19 level in a 0–0 draw with Ukraine at Morton Stadium. He appeared at this level on a further four occasions in 2010, including three appearances in UEFA European Under-19 Championship qualifying against Luxembourg, Bulgaria and Serbia. Horgan later progressed to the Republic of Ireland under-21 side, receiving one cap.

On 28 March 2017, he made his senior international debut, coming on as a second-half substitute in a 1–0 friendly defeat against Iceland at the Aviva Stadium. Horgan scored his first senior international goal on the 3 June 2021 in a 4–1 win over Andorra in a friendly at the Estadi Nacional. 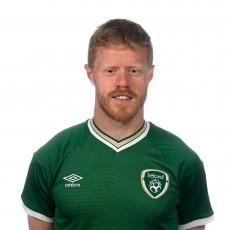