Paul was a bit of an unknown quantity to most Irish fans when Trapattoni called him up for the friendlies against World Cup-bound Paraguay and Algeria in May 2010.

He qualifies through his grandmother and came to the squad on the back of an excellent season in the Championship. Made an impressive debut as a substitute v Paraguay and was promoted to the starting XI against Algeria.

A neat passer who rarely gives the ball away, Paul also has good tackling skills and is brave in the opposition penalty area.

He turned in a typically hard-working performance when he played central midfield against Uruguay on March 29, 2011.

A serious injury interrupted his advancement and eleven months passed before he made his international return as substitute against the Czech Republic on 29/02/'12. His consistency for Ireland saw him called-up to the squad for the finals of EURO 2012 in Poland/Ukraine. And he made his Championship debut when introduced as substitute for Glenn Whelan ten minutes before the end of the 0-4 loss to Spain.

Green started the second game of the Martin O'Neill era against Poland in November 2013 and produced an accomplished display.

He joined Rotherham United from Leeds United in July 2014. 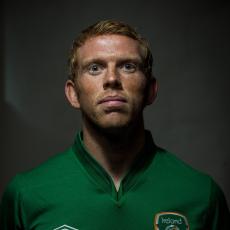