A key member of the Women's U19 Team that reached the semi-finals of the European U19 Championship in 2014, Katie was called into the WNT squad for the 2015 Winter Training Camp in La Manga and played in a training game against Norway.

She made her competitive international debut for the Women's U17 team three weeks after her 15th birthday.in 2010. Katie played a major role in assisting Raheny United to the League and Cup double in 2014 and scored a superb goal from a free-kick in the Continental Tyres FAI Women's Cup Final against UCD Waves at the Aviva Stadium and also helped them qualify for the last 32 of the UEFA Women's Champions League.

She made her senior international debut against Hungary at the Istria Cup in March 2015 and player of the match on her competitive debut against Finland. Named team captain by Colin Bell in 2017. 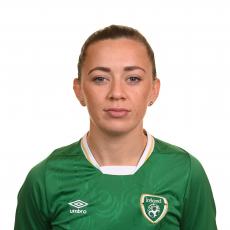