Another member of the breakthrough 2010 U17 squad, she captained the U19 squad which narrowly failed to qualify for the 2013 European Championship. From Cork, she played in the Bus Éireann Women’s National League for two seasons with her local club and made the Team of the Season in 2012.

Joined Glasgow City in June 2013 and helped them qualify for the last 16 in the 2013-14 Women’s Champions League and the last eight in 2014-15. Was joint top scorer in the 2015 World Cup qualifying campaign with three goals and also bagged one at the 2014 Cyprus Cup. She scored was a last gasp winner against Croatia in June 2014.

Denise moved to the United States, where she started with Houston Dash before joining North Carolina Courage, where she has twice won Team MVP in back-to-back title-winning seasons. 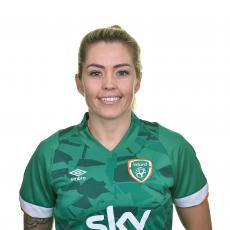