A key player for Raheny United in their recent domination of the Women’s National League and FAI Umbro Women’s Cup and helped them to the last 32 of the Women’s Champions League in 2014-15. Also won the Continental Tyres WNL Cup with Rahney in 2015. The 22-year-old is another member of the 2010 U17 squad to graduate to the senior squad. Was impressive at the 2013 World Student Games in Kazan and made an immediate impact on her senior international debut as a substitute against New Zealand at the Cyprus Cup in March 2014. Made her competitive debut against Russia in May 2014.. 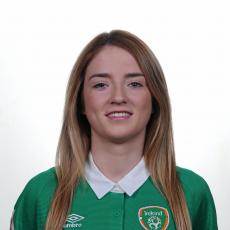