Derrick was unfortunate to be sent off on his U21 debut against Italy in September after making an impressive start to the game.

Born in Germany, Derrick lived briefly in North Carolina but moved to Waterford as a child and established himself with AFC Tramore the signed for Aston Villa in 2009.

He made his first-team debut against QPR in December 2012. Also played in 2011 UEFA U19 Championships. Joined Bristol City in July 2013 and then moved to Blackburn Rovers in 2016.

Derrick made his Ireland senior debut away to France in 2018 and scored his first senior goal against New Zealand in 2019. 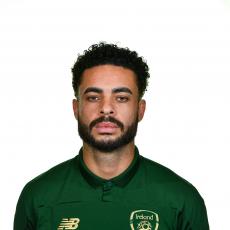