The 28-year-old American born striker is currently playing in England after spells in Sweden, France and Germany. A graduate of the University of San Francisco who was drafted by WPS side Chicago Redstars in 2010 and then had a spell at California Storm. A strong player who leads the line well and is the top scorer in the current squad with her most recent goal coming in August 2014 against Slovenia. Moved to Notts County after a spell in Germany with Freiburg. Goals: 13. 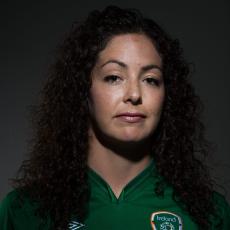