Keiren Westwood was superb when he played his first competitive match for Ireland in the EURO 2012 qualifying match against Macedonia on March 26, 2011. He was selected in place of the injured Shay Given and was instrumental in helping Ireland to a precious win with a magnificent second half save as Macedonia threatened to equalise. He confirmed his outstanding form three days later when Ireland lost to Uruguay in a friendly.

Keiren made his debut for Ireland in a 1-1 drawn friendly match against Nigeria in London. The injury that kept Shay Given out of the friendly against Paraguay on May 25, 2010 afforded Westwood the opportunity of playing his first 90 minutes for Ireland after substitute appearances against Australia and South Africa in the Summer of 2009.

He again started against Algeria on May 28, 2010, and contributed to a 3-0 win. He again showed what a competant goalkeeper he is when he played 90 minutes against Bosnia & Herzegovina on the eve of Ireland's departure to EURO 2012.

Keiren transferred from Coventry City to Sunderland in the Summer of 2011. He worked with his current Ireland manager Martin O'Neill at the Stadium of Light.

He moved to Sheffield Wednesday in July 2014, signing a two-year deal with Owls. He was the club Player of the Year for the 2014-15 season. He played a key role in their run to the Championship play-off final in 2016. 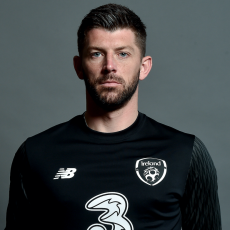