The 27-year-old American-born defender qualifies through her Mayo-born grandfather. After graduating from the University of Illinois she played for Boston Renegades in the 2008 W-League season scoring four goals in five games and also had two spells with the Chicago Red Stars. Currently seeking a new club. Made her international debut against USA in 2008. Her sister Shannon has also played for Ireland. 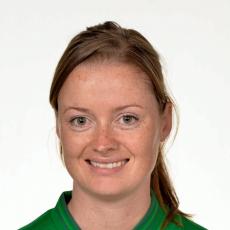