James has been an exciting addition to the Republic of Ireland senior international squad this year having broken into the Sunderland first team following a transfer from Derry City in 2011.

The young winger previously represented Northern Ireland at underage level but opted to pledge his international future to the Republic of Ireland. He was included in the Euro 2012 squad and made a substitute appearance against Spain.

Derry-born McClean had long been considered a bright talent with his hometown club where he flitted between left-wing and left-back. He also had a spell at Institute, an Irish League club based in Derry.

He made his SSE Airtricity League debut in 2008 against Cork City and went on to make 73 appearances for the Candystripes, scoring 18 goals. He won a First Division winners medal with Derry City. He was included in the Airtricity League select that played at the Aviva Stadium in 2011 before his move to the Stadium of Light.

After a slow start with the Black Cats McClean was given his debut in Martin O'Neill's first game with the Premier League side in December 2011 against Blackburn. He ended the season securing Sunderland's Young Player of the Year award. McClean joined Wigan from Sunderland in August 2013.

After emerging in the international scene with Giovanni Trapattoni's Ireland squad, McClean will look to progress under his former club manager Martin O'Neill. Scored his first Ireland goal against Portugal in New Jersey in June 2014. He also scored against the USA in November 2014.

McClean scored from the penalty spot against Slovakia in March 2016 - his first time to take a spot-kick in professional football. The Derry man was an integral part of O'Neill's squad at UEFA EURO 2016, where he particularly impressed in the famous win over Italy in Lille.

McClean made his 50th appearance as captain in the MetLife Stadium, New Jersey, against Mexico.

McClean continued to go from strength to strength under manager Stephen Kenny and was handed the captain's armband for the 1-1 draw against Ukraine in the UEFA Nations League in June 2022. 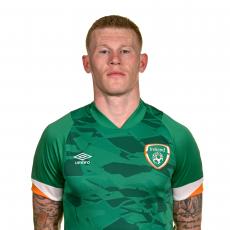