From Donegal, she won the 2009 FAI Women’s Intermediate Cup with Kilmacrennan Celtic and was part of the successful international U17 team in 2010. Claimed Women’s National League and FAI Women’s Senior Cup medals with Raheny United in 2012-13 and 2013-14. Became the first women to score a goal at the Aviva Stadium during the 2013 FAI Umbro Women’s Cup Final. Gained first senior cap against USA in November 2012 and was part of the 2013 and 2014 Cyprus Cup squads. A UCD medical student. 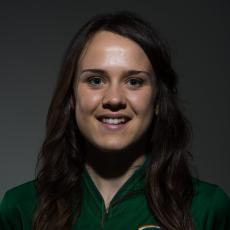